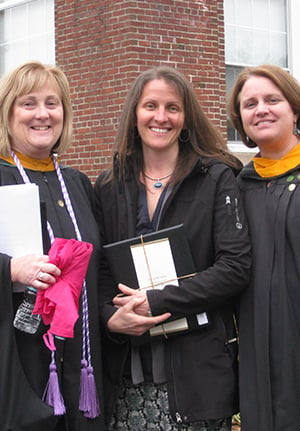 Sarah Flynn-Savoie was planning to become a teacher before a bundle of joy helped change her mind.

“I ended up having a baby early in college. Then, I went over to nursing school as an adult learner,” she said. “I really enjoyed caring for people — children especially. That’s why I made the switch.”

She began work at Seven Hills Foundation providing care to pediatric and adult patients with complex medical needs. From there she moved on to work as a labor and delivery registered nurse (RN) at Heywood Hospital in Gardner, Mass. After graduating from the Fitchburg State University RN to BS in Nursing online program in May 2013, Flynn-Savoie was hired as a Neonatal Intensive Care Unit RN at UMass Memorial Medical Center in Worcester, Mass.

“My resume wouldn’t have even been passed through without a bachelor’s degree,” she said of her current job. “They weren’t hiring nurses with associate degrees when I applied, so I wouldn’t be where I am without that bachelor’s degree.”

Flynn-Savoie said the online format fit perfectly into her schedule.

“Fitchburg State is very local to me, which was nice, but I chose online because I work the night shift, so it would have been very hard to go to classes,” she said. “It was ideal. There’s definitely more downtime at night, and I was able to get some work done and not have to miss sleep to be present in class.”

Flynn-Savoie had some apprehension about the one portion of the RN to BS in Nursing program that was not online, the capstone course: NURS 4600.

“I had a different attitude when I was researching the program,” she said. “I didn’t quite understand the benefit of having a clinical piece considering I was already a practicing nurse, but once I completed the clinical, my attitude about it completely changed. It was a great opportunity to give me exposure to an area of nursing that I didn’t currently work in without having to quit my job and try that area of nursing.

“At the time, I was doing maternity and pediatrics, so I tried the visiting nurse program and also nurse education. I worked with a hospital nurse educator, which was a completely different role.”

“It was very challenging for a small number of credits, but it really helped me to sit back and evaluate everything I had done in my nursing career thus far,” she said. “I just completed a PACE program for my current job and it was very similar to the Portfolio class. It was so much work, but it really helped give you the big picture.”

Additionally, the program provided Flynn-Savoie with some key insights into leadership.

Flynn-Savoie said she felt like she got exactly what she wanted from the program.

“The professors were great,” she said. “They always responded to my email. I felt like their constructive criticism was all justified. Some of the professors have reached out to me a few times since graduation. I will bump into them in town and strike up a conversation. Even though it was online, I had a great relationship with the professors.” Flynn-Savoie had plenty of success as a student in the RN to BS in Nursing online program. In addition to earning a 3.8 GPA, she received the 2013 Grace Gummo Award for Academic, Clinical and Leadership Excellence.

She also attended the graduation ceremony, which she said was a fun experience.

“It was interesting because the RN to BSN program was typically adult learners,” Flynn-Savoie said. “The graduation was with the whole university, so I was sitting in a row with people who were 22 years old while I was in my thirties. And I was one of the younger women in the online group. It was interesting sitting amongst the young people. Walking across the stage is a great feeling of pride. Having my husband and family there to see me do that was great.”

Another advantage to earning a degree online was that Flynn-Savoie was able to attend her kids’ athletic and extracurricular activities.

“Being present at all of their activities was important to me,” she said. “My youngest plays ice hockey, which keeps us going all year long. And the older ones have their own things going. ”

No matter where her career takes her, Flynn-Savoie knows she is better equipped to handle whatever comes next, because she took on the challenge of earning a degree online.

“In this day and age, the more education you have, the more valuable you are,” she said. “Being able to fit this program around literally any schedule makes it a great choice.”

BSN Program Designed for Working RNs
If you are a registered nurse (RN) with an Associate Degree in Nursing (ADN), you may want to consider pursuing a Bachelor of Science in…
Read more
The Role of Communication in Nursing
Communication consists of individuals or groups of people exchanging information through conversation or action. All living beings communicate. For humans, the transference of knowledge, facts…
Read more
Diverse Patients Need Diverse Nurses
Think about traveling to a different country. Maybe you have a language app to help communicate in the local language, but confusion can still happen.…
Read more
How Can Evidence-Based Practice Improve Client-Based Care?
Evidence-based practice (EBP) is defined as “a conscientious, problem-solving approach to clinical practice that incorporates the best evidence from well-designed studies, patient values and preferences,…
Read more
A Look at Forensic Nursing with Dr. Deb Stone
While forensics is a relatively new area of nursing, just recognized in the 1990s, it’s a very important and meaningful one. Dr. Deborah Stone, an…
Read more
Is a BSN Required?
Nurses need the proper preparation to deliver quality patient care. The Institute of Medicine (IOM), known as the National Academy of Medicine (NAM) since 2015,…
Read more
A Look at Nursing in Massachusetts
If you are a registered nurse, you already know that the healthcare industry is changing rapidly. From advanced medical technologies to evidence-based practice, today’s RNs…
Read more
Role of Research in Nursing
Research is the foundation for breakthroughs in science, technology and medicine. Cars, planes, computers and organ transplants are the result of scientific inquiry and ingenuity.…
Read more
RN to BS in Nursing Program Manager Linda McKay Excited About Updated Curriculum
In the 39 years since Linda McKay arrived at Fitchburg State College as an instructor, she and the nursing programs she now manages have come…
Read more
A Nurse's Role in Violence Prevention and Intervention
Mentioning public health problems might bring to mind tobacco use, heart disease and prescription drug overdoses. Just as serious, intimate partner violence (IPV) is a…
Read more
Salamurovic Soars to New Heights with Online Degree
Nensi Salamurovic made her first trip to Fitchburg State University count. “The first time I got in touch with them, they explained that my entire…
Read more
A Well-Rounded RN to BS in Nursing Curriculum
Fitchburg State University offers an online RN to BS in Nursing program that allows registered nurses to earn a BSN degree in as few as…
Read more
Have a question or concern about this article? Please contact us.